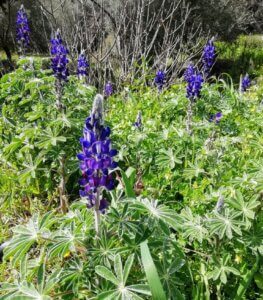 Late March, and a dreich, drizzly day for my trip to Hania……The sun wasn’t keen on popping out for most of the way, only every now and again beaming through tender fresh greenery or highlighting increasing patches of nature’s palette at its’ best. Yet, even in the mid morning grey, miles (or is it acres??) of mountainsides were lit up with a determined yellow gorse…’no sun?…no problem! – we’ll brighten up the day’……. And they did, as if the dull day was their opportunity for showing off their latent powers. Only in the dismal area around Mesavlia did a real gloominess descend. No inkling of spring there for another few weeks, and still with the garish slash – deep into the rock where mud and stones will cascade down onto the road at the slightest hint of rainfall…… of course there was debris to avoid, as is pretty much normal since the extremely wet winter a couple of years ago forced open the gash. 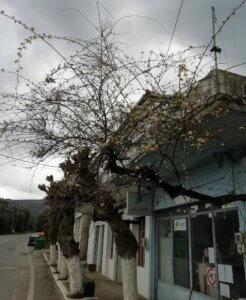 Unlike the first 2 sluggish months of the year, the third month is always in a hurry to take us to better days, and let our skin remember how to melt into the warmer rays. That’s the promise of spring leading us to summer: March takes that responsibility seriously and prefers not to dawdle, there’s urgency in the air as temperatures rise………except….well…..not so this year…. Although the month often had me wondering if time was being fast forwarded, and the anticipated warmth teased for a bit early on, mostly weather and temperatures settled in the direction of winter. Exposed mountain tops were heavily capped with fresh snow, setting more of a January scene – overall much better for farmers and we novice gardeners to not have things too warm or too dry just yet. Soon enough (fingers and all else crossed) the t.shirts I want to bring out of lockdown will take up their true and proper place…..yes!…..lighter clothes and fresh hope for an overall lighter atmosphere…..in all respects….is that too much to ask for……?? 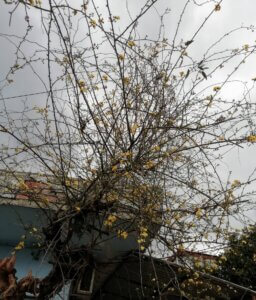 March being the month for nominations and awards in other areas of creativity, I see daily many possibilities for categories and nominees in the buds, shoots, flowers, blossom – the resilience, the persistence, the glorious spread of colours and aromas that Mother Nature showers us with. My nomination for services to humanity and tenacity is a small tree that has the misfortune to live in a desolate windy street corner at the edge of Kandanos, not the warmest village in winter-time.
I often imagine that it remains cold even in summer. The tree survives, to my mind, against all odds…..she seems to be ignored, and despite that, each year at this time blesses anyone who wishes to pay attention with a pale-yellow blossom. Nothing showy like the gorgeous creamy whites or ballet dancer pinks further out of town – something more subtle. No way interested in competing with the bright yellows of gorse adorning the mountainsides, she’s a quiet and humble thing. So, should there be a Nature’s Best award ceremony, I’d like the little tree to be considered, at least to be awarded a handful of fertilizer to recognise endurance, for annually doing her best to brighten that corner, and for the tingle of pleasure that she sends my way as I drive past.

Then it’s on with the journey, out in the country playing Country, safely away from the attention of any detractors of my musical predilections. I’ve recently come across a young singer who seems to know something about me as she sings My Church…….but I’ll confess no more about my cussing ways….just nice to know that the older country voices are still revered by that generation…. At other times, days when a drive is not on the schedule, I may take a wander to confer with the sea snails…really a collective of various shell inhabitants who cluster in the shallow edges of a tiny cove. 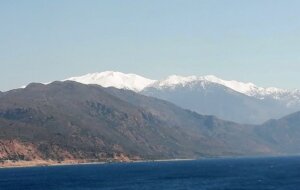 They are wise, more so than the garden snails. They teach patience – will not reveal themselves until I sit quietly on a rock – then their wise counsel reminds me (always!) of the need for forbearance where necessary and removing oneself to places of solitude whenever possible. I watch as they stumble and stagger drunkenly over pebbles, not stopping to moan about their lot…they just get on with things, which, if I recall correctly was pretty much the motto of my younger years….. a time when Cash, Reeves, Elvis et al played scratchily on the old record player…… similar to the current Nike ‘Just Do It’ slogan – ‘just get on with it’ – would be the reminder when chores, homework etc had to be done…….. Just getting on with something is the most positive attitude I can adopt…..whether the day be locked-down, dreich* or even pleasant enough for a cool dook** in the sea. 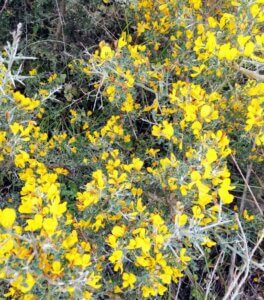