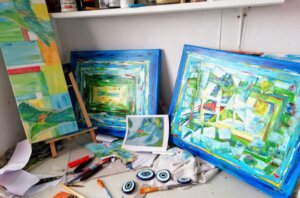 At a certain time, on a certain kind of winter’s day the setting sun throws out the most stunning golden beams of light. There, at a certain point on my drive home from Hania, standing ready to participate in the evenings display, are certain kind of trees – the ones not yet fully winter naked, with wafer thin leaves stretching ready for the transformation.
As the light drives through what might have appeared to be wizened and ‘past their sell by date’ relics, something outstandingly inexplicable happens. The tree is changed, its’ stature now regal and iridescent. A warmer light exits the leaves and lands a reddish-golden hue on the nearby land. I’d complain that it’s a hazard to drivers such as I, but who in their right mind could complain (and to whom??) at such a sight? I just have to steady myself and soak in the brief dance of nature while keeping the car on the road. It never occurs to me to stop, I only think of that while recalling the incident…..

No journey would never take place if I had to stop whenever an entrancing scene appeared, they’re everywhere – round every corner, along every dip and valley, across meadows and groves, by the roadside, in the sky…………. I’m regularly driving while intoxicated…… by all that lies in wait…… Not easy recently, I’ve had to resist the allure of almond trees thickly dressed in pink blossom, and other trees competing in the beauty stakes with full of wedding day white blossom. A mostly warm January encouraged early flowering of camomile carpets scattered about and ably imitating snowy sprinklings. 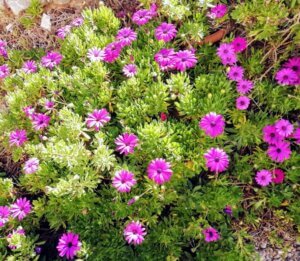 Some years, it might be snow or hailstones that we’d be seeing. Through the first month of this year, snowfall has been light, and any fresh dustings, even on the higher areas didn’t stay long. I know enough to not predict that the mountains will remain uncapped during the remainder of winter……. I also know that the exquisite delight will never abate – every day, every walk or drive will bring something that resonates with a joy even deeper than that which chocolate gives.
January wasn’t all wide expanses of yellow buttercups, tiny irises, trees in blossom and stunning sunsets – although they were prolific. Rain occasionally came and filled the mega puddles, to the point where certain short legged dogs needed swim aids to pass through. Although a certain owner would not permit such nonsense, so afraid would she be for her floors and carpets having that sludgy mud brought back home on little feet and a low slung belly. That’s the same owner who’s become prone to anxious yelling and whistling episodes while out walking. 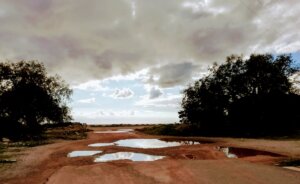 Not being a close relative of Dr Doolittle, she fails to understand that the dogs are telling her, ‘she’s there!….right there!!….there!!!….can’t you see her??’ And, ‘I’m here, I’m here, I’m here, I’m here…….I’m right by your foot’. The deranged spinning and yelling and whistling and ignoring of the poor dogs help continues, probably too long. Definitely a cause for concern, before she notices the unmissable bright white dog right by her ankle, in her mind (cause for concern alarm ringing loud!!) the dog was missing and then mysteriously re-manifested…..Best not to hark on about this….but it is becoming a regular occurrence….maybe the dogs are playing tricks….not the certain owners eyes…or mind….

But that feeling of stupidity once embraced is hard to shake off. Memories of childhood school nature walks circulate, how once she knew the name of everything along the way – the trees, bushes, flowers, birds, insects & butterflies. It was a matter of great pride, back then. It’s different now, not the same countryside for a start. Migrating birds swooped in during January, flashes of a yellow chest, another with a bit of red under the tail, much happy chirping and sing song.
Being able to identify the sparrows, already building nests, was not as satisfying as it might have been at age 7. The other, temporary, ones with their different colours and songs were hard to name, for starters they flit about all over the place, clearly in order to not be identified. Beyond knowing the Red Admiral and Cabbage White butterflies, what are those teensy ones that sometimes look lilac and other times a gentle Wedgewood blue called?? One day, instead of returning home and launching back into whatever the project of the day is, a book or website will be opened and names learned…..but for how long will the new information be retained??……. No replies needed to that question….. thank you. 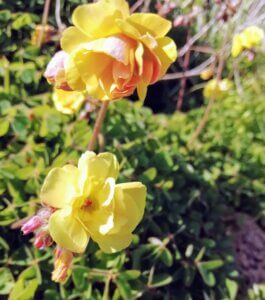 Meantime, projects at home continue – a little bit of arty stuff, experimenting with cookie and/or curry making, and some marmalade making after finally getting hold of excellently bitter, and full of pectin loaded pips, oranges (Neratzia, gratitude to Giannis Petrakis at the supermarket for that). An important winters evening project is keeping the television company, perhaps with chocolate…. and a fine afternoon project is to sit by the garden and check out how quickly things are growing, chat with passing guests, get harassed by the cats, and generally just appreciate simple pleasures…..

Very friendly, clean. Great food and location. Met the hostess, great to talk with always busy but got time for everyone.