Dear September, you certainly know how to rock and roll….. You rushed in on us all ablaze, brandishing the fiery heat of August, as if it’s perfectly normal to bask in such fine temperatures day after day. Not that we’d refuse your gifts, even though it can be SO tiresome to grab a towel and toddle across the road for a cooling swim……
After 8 glorious days, the dark forces found their way to reverse your spell. Before we knew it, we had to hold onto something solid to prevent being blown away, while the fury of winds held hostage for too long rampaged throughout the day. But, dear September, you pulled back and managed to provide another week of fine weather, right up until news reached us of the impending Medicane Ianos (Janos). Game changer. We were thrust into weather so opposite. Not only did the horizon disappear, so did the ‘crocodile’…and the view to Anidri (Gialiskari) beach…and, really, for a while – anything more than a few meters away was out of vision. Rain lashed down at such a force, forming a river where before there was a road; a lake around the building made it feel like we might float off into the invisible horizon. And how lucky, how very lucky, we were, that there was no damage…. not to our premises, and not much in this area. Sadly in other areas of Greece – a tragically harsh reminder that nature can conjure up powers way beyond our control. 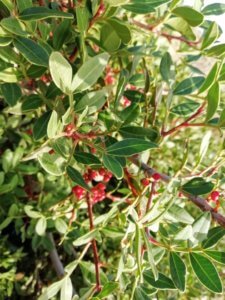 The remaining days of the month were decent, temperatures not reaching the sweltering heights and not every day sparkling in sunshine. As a result it became possible to take the dogs for a walk now and again. If I’d tried that with them in the heat of summer there’d have been a canine revolt, a doggy rebellion, leash refusers…………. It’s a good example of the difference this year that I could even think about taking a walk in September. That bit of extra time allowed us a meander up to the fortress, and how desolate it is at that time of year. Maybe because it’d been a greyish day or perhaps my own mood was jaded, but everything looked devoid of any interest in life. The evergreen bushes, though so recently washed of the summer dust, were dull; the earth parched and barren. Any remaining greenery on the thyme bushes had retreated into the bark, save a few miserable offerings to remind us that they were in some way still alive. I began to wish I’d not bothered. No vibrancy just a sense of a place locked in hopelessness.
Approaching the ruins of the old fortress, doing my bestest not to dwell on bleakness, things took a turn for the better. The soaking bestowed during the Medicane was enough to set in motion the whispering beginnings of fresh sprigs of grass, spread across ground clearly more fertile than that just passed. Pretty risky to grow in such a rush when there’s no knowing when the next rain will fall, but that optimism lifted my spirits. A few steps further along and looking out over the sandy beach, an idle sun slipped below the cloud line, growing bigger and redder as it eagerly dropped behind the last point of the headland. A shorter daily span indicating that summer is leaving and autumn making steady progress – within a few weeks, or less, the sun leaves the day by disappearing directly into the sea, when viewed from the sandy beach. During the shorter days morning is announced by the sun arriving from the sea, as if just for me – right in front of my kitchen. 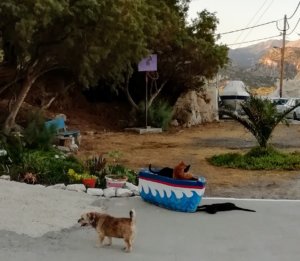 The September walks have done immeasurable damage to my reputation, to the point where I may be unable to redeem myself. There’s evidence, photographic (I know who you are!!), and I doubt I can talk my way out of this….. It’s not anything I’ve encouraged or planned….. it just happened that a family of stray cats took it upon themselves to adopt me. They hang around my front door. That may be because I offer an all day cat buffet……..but I only did that after they started accompanying the dogs and I on our walks. I’d hoped they might have forgotten about that springtime anomaly, but – oh no – at least 2 of them follow us, scurrying out any time we set off, bouncing about over the dogs in a manner contrary to the usual animosity between them. Ginger – appropriately named – making a heck of a racket all the way and spoiling the tranquillity I’d prefer while checking out how quickly the new grass is growing, or appreciating how the evergreens are not really dull. They offer up bunches of red berries and it’s their preference not to be loud and excitable, something they’d like me to respect……. It was quite fine taking a stroll under the stars on summer nights, accompanied by menagerie of animals, convincing myself that I’m not being observed… In daylight there’s no such self-deception, my secret is out ….. and jokes abound……

So dear September, another month of sunshine, rain to make my flowers happy, warm seas, lucky-determined guests, the relief of laughter – and an occasional guitar/sing-song evening – at the café, nights slowly drawing in …. a good month……..even if sights on the drive to Hania were less than inspiring…. all very scruffy……..Hang on a bit….. the initial outlook is of dried up foliage and parched land – but in that high ground between Kandanos and Floria, heather bushes were beginning their annual purple spread. Once I lifted my outlook away from the post summer state of affairs, the evidence of developing autumnal colours was there, takes a little effort to see past the drab and dried-out to notice ripening fruits on trees and bushes..…and all else that autumn brings….surely a story for another month…..
Flora, 3rd November 2020

Great location, simple, clean accommodation....all you need and next to the best cafe in Paleochora with magnificent sea views...