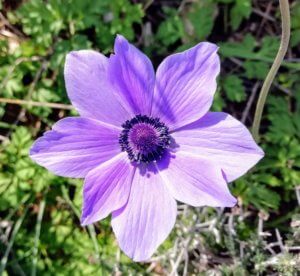 The underbelly of a passing seagull radiated the sunsets’ glow, as did the crests of waves, bringing a satisfied ending to the day. At the same time, broken shards of a rainbow cut through grey clouds and plunged into the sea; the sea still shining broad bands of indigo- blue and others of turquoise.
All this for me.
All this to remind me that a rainy day can bring unexpected gifts. All this to remind me that not all of November was a disappointment…….
It’s hard when a friend lets us down, but a whole month??? I was on the way to feeling that the entire month was one of betrayal – for a start, weather failed to provide lazy days basking in warm sunshine. Instead, the cold and wet had me resolved to wearing socks, then, as it was clear we were to remain in gloom, out came the duvet and heavier layers of clothing. Another shattered dream of 2020 to support myself through! So very spoiled have we been in recent years that I just took it for granted that it’d be as before. I’d anticipated fine weather and looked forward to it with complete confidence. If there’s anything to learn this year, it’s that not much is as before! Extreme wild weather early in November hit the eastern part of Crete badly, with massive flooding and damage destroying homes and livelihoods in that area. No damage of that extent down our way. 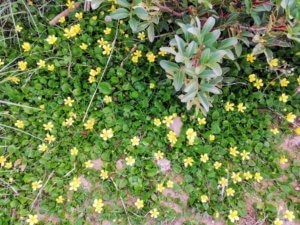 I was driving on one of those days of torrential rain, carefully, aware of the possibility of landslips around every corner on the mountain roads. On the national road, the less treacherous part of the journey….usually that is..… I noticed a load of rocks tumbling down the side of a cliff. How my foot knew that the best course of action was to hit the accelerator I’ll never know. A rapid assessment of the situation no doubt ensued, just below the conscious level – noting a line of traffic behind and another line approaching, an awareness of a wet and potentially slippery road…..oh and rocks bouncing….. Drivers were using more care at that point than often is the case, perhaps patrolling police cars were keeping control. Whatever…. it was reassuring that a dangerous situation wasn’t made more hazardous than it needed to be. As I whizzed on, a sneaky peek in the rear-view mirror did not reveal anything untoward, cars did not swerve, stop, pile up Hollywood style….. or become flattened. Instead, the rocks must have thumped to a stop in the ditch…..I’ll never know. In fact, I had to question whether I had seen what I …….did actually see………..really, I did….. 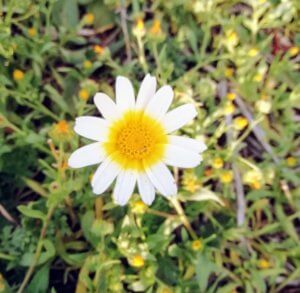 As the month progressed and all hope of perfect sunny days was lost, my hot water bottle started to call – a feeble offer of help from the high up cupboard, that place where out of season items are banished. ‘Mid-November??’. ‘Mid-November?’, I repeated to the insolent item, ‘don’t be thinking you get out early, just because this is a year of years!’. That was a disturbing moment, was everything turning topsy turvy?… could I cope with more…….? The following morning, a welcome bright and sunny morning, dark clouds unusually absent…….and snow shone on the mountain peaks……….oops… those suggestive offers of re-connecting from the top cupboard had not been a ruse to bother my already bothered mind, help had been offered in advance of a particularly chilly night. No further thoughts of swims, snow means packing away a hopeful bikini and accepting the inevitable ride through winter. Or does it?? I forget sometimes that this is Paleochora, where a windy day on the side I live does not mean it’s the same on the sandy beach, and of course vice versa but I don’t ever go looking for wind. I forget to look beyond the immediate (wind, crashing waves, snow a long way off!) and go seek the opposite. I’d kind of closed down. As a precaution I took down the insistent hot water bottle…….and looked out boots, jackets et al. Yet, friends often swim, not on the torrentially-heavens-pouring-down-on-us days but they get out and find a part of the beach without big waves and stay open to any sunshine that’s on offer. I clearly come from the wrong side of town, or perhaps I just get stuck in the wrong side of thinking when a chill wind hits. Lockdown has not helped, needing permissions to go anywhere and do anything can create a locked-down way of thinking, or not thinking…..that’s my excuse anyway. I don’t know if I’ll partake of a winter swim, reckon a period of exceptional weather would be required for that, but who knows, maybe I need to push the self-imposed limitations. 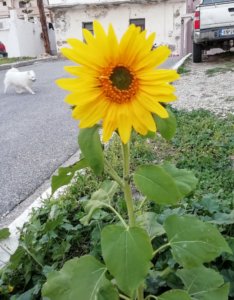 Out in nature there are no such limits. I found flowers intimating spring, exuberant and drawing in warm rays, deeply nourished by the rain and unconcerned by calendar or whatever my wild flower book says about when they ought to appear. A brave, solo sunflower brightened up a bit of nearby land….until sea spray stopped the show. Up on the fortress, lilac anemones began flowering by mid-month, yes – when snow first appeared, so did they. Clever as well, huddling alongside a bush, heralding in the paradoxical period where seasons collide and daisies, buttercups and nameless many others bring colour for weary eyes and pollen for the insects. Driving to Hania, fresh green carpeting had been laid out for winter, while autumn crimsons and ochres splashed everywhere, contrasting with the olive trees, always with leaves and sometimes flashing silver undersides when that wind whips up a frenzy. Only on days when I’m not leaning forwards, window wipers on at full speed, peering through fog and torrents can I pay attention to my surroundings.
Returning, late one afternoon – wipers not needed – the sun slid down behind remaining clouds, producing a stunning and protracted sunset. Golden deep-pink light filled not only the air – my whole body was infused by the glow. ‘Breath-taking’ barely covers the experience. Journeying smoothly home in an enchanted bubble, I came to appreciate that not all of November was a disappointment, quite the reverse…..despite the need for socks et al……
Flora, 21st December 2020